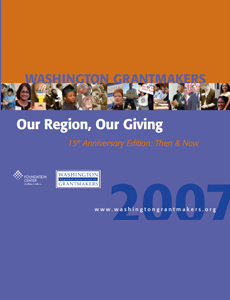 Our annual giving report generally focuses on change from one year to the next. We analyze the numbers to determine where growth—in terms of giving, assets, and number of foundations—is occurring. This annual data is a helpful report card for our region, and it is always gratifying when we can report that our region’s generosity is still on the rise.
But, now and then, it helps to take a longer view. Some changes will not reveal themselves otherwise. Our 15th anniversary seemed the perfect time to suspend temporarily the year-by-year approach and to look back even further, to see what the local philanthropic landscape looked like in 1992, the year Washington Grantmakers was founded, and compare that to 2005.
Key findings:
Type of resource:
Publication
Research
Topic(s):
WRAG
Giving Report
About Philanthropy
Facts, Figures, Trends
Origin:
Washington Regional Association of Grantmakers