Home » Resources » The Eight Neighbors: A Case Study in Collaboration and Formalization

The Eight Neighbors: A Case Study in Collaboration and Formalization 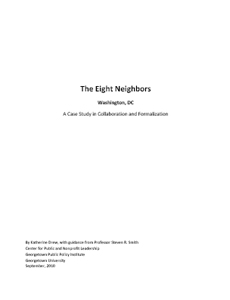 In September 2008, following the upheaval in the housing markets, Fannie Mae and Freddie  Mac were placed into federal conservatorship.  This event put at risk was $47 million in grantmaking to Greater Washington region.
At the initiation of Washington Regional Association of Grantmakers (WRAG), seven other organizations came to the table  to brainstorm a collaborative response. While WRAG was the professional association to which Freddie Mac and Fannie Mae belonged, and thus the most directly involved with the changes, all the organizations had been asking themselves what the conservatorship would mean for them and their members. This was the beginning of the 8 Neighbors group.
This is a case study of the group and its history from Georgetown University.
Type of resource:
Research
Topic(s):
WRAG
Philanthropy
Archive
Origin:
Washington Regional Association of Grantmakers