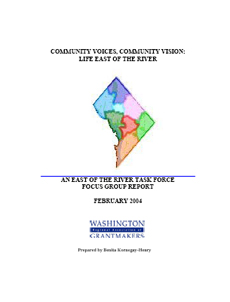 A revival is taking place east of the Anacostia River. There are plans to revitalize the river’s waterfront with residential, commercial, and cultural developments. Blueprints for the completed project show new roads and bridges, riverside parks, meandering paths for biking and walking, and vibrant waterfront neighborhoods reminiscent of Georgetown and Old Town Alexandria. Over the next few decades, long-neglected public housing units will be refurbished, major federal government offices will relocate to wards 7 and 8, and the now-polluted Anacostia River will undergo a thorough cleansing. If successful, the District’s plan will generate new investment and over $1 billion in tax revenue for the city.
But where do residents of wards 7 and 8 figure in these plans? And what do residents want for the neighborhoods they call home?
This report shows that people living east of the river have a clear sense of the problems that have plagued them for decades as well as a solid vision for redressing them. The nonprofits that have helped residents for years are eager to bridge what they call “the philanthropy divide” and to begin hands-on partnerships with grantmakers to build the human, physical and financial foundations for the thriving communities they envision.
Type of resource:
Publication
Research
Topic(s):
WRAG
Archive
Children & Youth
Origin:
Washington Regional Association of Grantmakers