Putting Racism on the Table is a six-part learning series for WRAG member philanthropic CEOs and their trustees to explore key elements of racism together. Last week, participants looked at a case study on mass incarceration with speaker James Bell, J.D., founder and executive director of The W. Haywood Burns Institute. Today, Graham McLaughlin, a managing director for The Advisory Board Company and supporter of Clean Decisions (a local business helping returning citizens transition from prison to outside life), and business owner and former Clean Decisions employee Anthony Pleasant, candidly share their respective experiences with navigating the justice system and discuss the challenges still facing returning citizens once they have served their time. 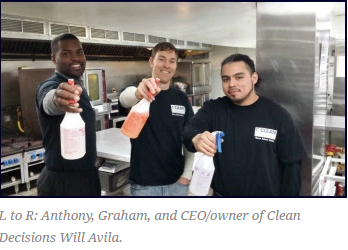 Graham:
I used to think socioeconomic class drove many bias issues and race was just a correlated factor. Then, I began living and spending the majority of my time with formerly incarcerated black and Hispanic men. In our first month together, I had more direct encounters with police and was treated with more suspicion (by everyone) than I had experienced in my entire life.

It is a world of continual negative feedback. It is a world, in words and actions, that calls you a monster every day. Some of the guys have tattoos, dreadlocks, and could be considered physically imposing. Others are clean cut and dress conservatively. They all face the same daily negative feedback.

Why does this happen? Why do three in four of our city’s black men serve time in prison – a larger percentage than in South Africa during apartheid? One explanation is that the power structure at all levels has extraordinary powers of discretion, and black (and Hispanic if they don’t just keep their head down) men are feared due to biases drilled into us from birth.

Studies show, police target minorities in warrantless searches, preschool teachers suspend black children at three times the rate of whites, prosecutors try black children as adults at a rate 18 times greater than that of white children, judges sentence blacks to 10 percent longer sentences than whites for the exact same crime, and put black children in prison six times as often for the exact same crime. Thurgood Marshall summed up why we have a perpetuating cycle of discrimination when he noted “the basis of the decision to single out [racial minorities for searches] is less likely to be inarticulable than unspeakable.”

And it doesn’t stop once you’ve served your time. When released, you are discriminated against in various areas, from employment, to housing, to civil rights, and live with the shame and stigma of being known for some of the worst things you’ve ever done (or potentially branded for something you didn’t even do). It’s hard to come back from all of this, and not be angry or give up and give in to substances that numb the cold, unfair realities of our society. Some are able to overcome these challenges but, as you will read below, even then the impediments of discrimination are never ending.

Anthony
I went to prison as a teenager. When most young people are learning what it means to be an adult, I was learning to survive in prison. Coming out of prison, I was therefore completely unprepared for the world, and if not for Will Avila and Clean Decisions, I would be back in prison, a drug addict, or dead on the streets. Instead, I lived with Graham and Will, a support system almost no returning citizen gets.

Graham mentioned his surprise at police interference. My surprise was at the interactions between Graham and the police. Graham could talk back and reason with police officers – stuff I’d literally be locked up for – and they always believed him!

I know many of you know Graham as a good choir boy now, but he and I were both wild in our younger days. He always smooth talked the police, partly because of his silver tongue, but mostly because of his white face. He has no record. I went to jail for a murder I didn’t commit.

The justice system took ten years of my life. At the time, I was doing many other negative things in my life that deserved punishment, so ultimately, I accepted my sentence. But last weekend, the “justice” system took even more from me, and this time I was doing all positive things.

Two weeks ago, after spending a year learning the trade, I finally launched my own furniture assembly business. Last weekend, I was scheduled for one of my first jobs, living out what should have been one of the happiest, proudest days of my life. Instead, I ended the day penniless, hopeless, and in a jail cell after police pulled up behind my parked car saying they had received a call about a car on fire. Mine was not. They told me to get on the ground, ran my registration (that had an issue I was unaware of), found a “weapon” (the knife in my toolbox), and took me away in handcuffs after leaving my three power drills and toolbox sitting on the side of the road and sending my car to the impound, robbing me of my life savings and the equipment I need to make a living.

My public defender – usually overworked and, therefore, advising to plea out regardless of the case – actually fought for me, and I’m confident I’ll beat the weapon and forged registration charges. However, I don’t go back to court until May 12, can’t get my car out until then, no longer have the tools I need to make a living, and after investing everything in starting the business, not only do I not have any money to my name, but I also owe a donor from Changing Perceptions (the non-profit Will started to support guys coming home) a $1,000 loan repayment, and have no way to earn the money to pay him back.

I was making positive decisions and building a company in the model of Clean Decisions that would hire and help other returning citizens. Now, I have nothing, and if I was like most returning citizens with a limited network, rather than being blessed to have the support and resources of Will, Graham, and Changing Perceptions, I’d go back to drugs and just give up. I will make it. Most wouldn’t.

James Bell, speaking on mass incarceration at WRAG’s most recent Putting Racism on the Table session, advocated for listening sessions with the community to better understand one another. If you’re interested in following that advice, every weekend about 10-12 Clean Decisions/Changing Perceptions members (all formerly incarcerated black and Hispanic males) get together for a “Pancake Saturday” breakfast and discussion. Feel free to email them to participate and hear perspectives and suggestions for leveraging your power and resources to improve our area’s justice system.