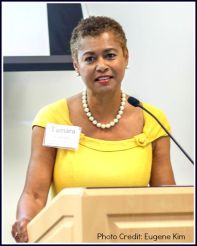 Last Friday, I passed by Columbus Circle in front of Union Station as journalists prepared to film their Columbus Day news segments. I was reminded of the role that statues play in setting the stage for conversations.

Here’s what one group of young men thought when they visited Monument Avenue, home to a number of statues to Confederate soldiers in Richmond, VA,

“Today me and my peers decided to visit the monuments to see what all the fuss was about and we came up with this.Is it more convenient to take down some statues than to improve the real problem of society? … From living in low income areas we have our own ideas about society. Everybody pointing blame at monument avenue and statues that reside there, but those statues never did anything to me or people that i care about. The only thing that ever harmed people in low income areas is the violence that reside there …In low income areas 5 kids each [the five who visited the monuments today] from a different area [different apartments] collectively knows twenty-two dead [over the past year], where the protest about that, where are the reporters, where are all the organizations that claim to be to alive to better the lives of blacks. … Instead of using money to knock down statues that most people in low income areas never even seen how about using that moving to improve schools,fix up the community that we see everyday, or why not protest in our neighborhoods where we see violence and hate the most. We all was taught about pride and loyalty, but why nobody ever taught us not to die over the neighborhood that our mother renting…Everybody wants to help but nobody is really helping are they?”

As someone who grew up in Richmond with these statues, I get it. They are a bit like landmark wallpaper. But, isn’t that what normalizing is all about? We may think we don’t notice, but subconsciously, we do. And, now, a variety of events have caused those statues to rise in our consciousness. They are no longer benign wallpaper. We have been forced to think about what they mean, what they represent.

Seventeen-year old Daquan faces challenges much bigger than taking down a statue of a Confederate soldier, particularly a statue that is not a part of his day-to-day environment. He wants resources invested in making his community better. I understand his perspective, but it doesn’t have to be either or.

The reporters came to stand in front of Columbus Circle because the statue created the right backdrop for their story. What backdrop do these larger-than-life statues on stately Monument Avenue create for those driving by every day? Even subliminally, vital messages about power, justice, and history are conveyed by those statues. As individuals committed to improving the lives of people in our region, we have to think both about the direct day-to-day needs of Daquan and his neighbors, but also about the long-term implications of subliminal messages that perpetuate the false narrative of racial hierarchy. Advancing racial justice requires us to work on both fronts.

This piece was originally published on the Daily WRAG.