Earlier this week, newly inaugurated D.C. mayor Muriel Bowser spoke with WRAG members about her vision for the District and how she wants to work with philanthropy to advance a more equitable city. On the Daily WRAG, Tamara Copeland reflects on her message: 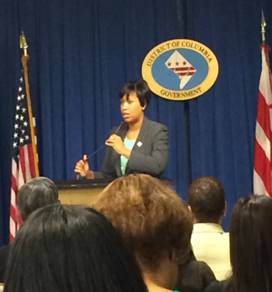 WRAG's Morning with the Mayor

“I’m a regionalist,” D.C. Mayor Muriel Bowser proudly proclaimed to a packed audience of local funders. “I want the D.C. region to be competitive in the country. I don’t want D.C. to compete against Fairfax County or Prince George’s County,” she said, recognizing the District as core to the region, but with a clear understanding that the region needs to work together as a whole.

With just a month in office, the Washington Regional Association of Grantmakers invited D.C.’s new mayor to speak exclusively with members about her vision for the District and how she wants to work with philanthropy.

After acknowledging the strong connections that exist between D.C. government and WRAG entities – including the Washington AIDS Partnership, the Healthy Communities Working Group, the Affordable Housing Action Team, and the Arts and Humanities Working Group – she went on to cite her commitment to new jobs, a cleaner Anacostia River, and affordable housing saying, “I am focused on growth in D.C. I want people with regular wages to be able to live in the District.”

When asked specifically what she needs from philanthropy, Bowser stated that, of course, dollars would be needed to implement some of her vision, but her desire for a partnership with philanthropy went well beyond funding. She expressed that she would appreciate the thought partnership of philanthropy as her administration works to build roadmaps to address the problems facing the city and its residents. She also called on philanthropy to help her set priorities. She asked that local philanthropic leaders help her to reach high net worth individuals across the country who should be investing in the nation’s capital. This message resonated with several WRAG member CEOs who had recently gathered to discuss how to encourage more national funders to invest in this region.

Lastly, and quite clearly, Mayor Bowser acknowledged the loss of funds from the Freddie Mac Foundation. Even with the transfer of some of those resources to a donor-advised fund at the Community Foundation for the National Capital Region and to a fund at the Meyer Foundation, both will end in the next few years, causing the loss of a multi-million dollar investment in the nonprofit sector in our region. “How does this community replace those dollars?” Bowser challenged the audience. Suggesting that the answer didn’t just reside with philanthropy, she offered that a group representing various sectors of the community should create a white paper of recommendations.

If this meeting is indicative of future connections between the Bowser Administration and philanthropy, the partnership that the mayor seeks is off to a fresh start. WRAG and the local philanthropic community are encouraged by Mayor Bowser’s willingness to partner with funders to advance a more equitable city – and region.