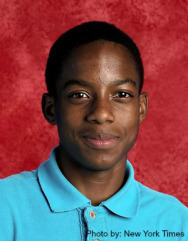 What is there to say?

Another unarmed, black child killed by the police. Another. Jordan was 15 years old, leaving a party in Dallas when a police officer, called to investigate underage drinking, shot him.

Either I have been in a black hole or this event that happened on Saturday night had not, as of yesterday anyway when I learned about it, received much national media attention. Have incidents like this become so routine that they’re not even news anymore? When comments started popping up in my Twitter feed, I was devastated. First, I thought, “Not again,” then I thought, “What can I do? What can I do to stop this stream of violence against black men and boys?”

Well, I’m not sure, but I know that my commitment to Putting Racism on the Table continues and is strengthened. When incident after incident like this occurs, I cannot dismiss either the unconscious bias that makes black males dangerous in the eyes of many or the overt racism that continues to plague our country. I cannot.

I also cannot write this without a comment about cameras and policing. Body cameras and dashboard cameras are often raised up as a response to these types of incidents. While they capture police shootings and other criminal actions, they don’t prevent them – and they don’t ensure justice. These incidents often occur in moments of intense emotion – fear, anger, perhaps even hatred. Decisions are made in the blink of an eye, decisions guided by racial messages received throughout a lifetime. Decisions that end lives. To prevent these shootings, we have to look deeper at structural racism and implicit bias. We have to examine ourselves, our own beliefs, and we have to examine those structures and systems that perpetuate racial inequity, even while, in the case of policing, the system is intended to protect.

Watch Julie Nelson talk about implicit bias. Watch Ava DuVernay’s masterful documentary “13th.” Read Michelle Alexander’s The New Jim Crow. Try to understand how “black male” has become synonymous with “criminal.” Then do something to change this. Each of us has a platform for reform, be that our family, our neighborhood, our workplace, our house of worship, our sorority, whatever. We should be talking about what happened and why it happened.

We can make a difference. I have to believe that. What will you do?

This piece was originally published on the Daily WRAG.