Home » News » How will philanthropy respond to the Roadmap for the Washington Region’s Future Economy?

How will philanthropy respond to the Roadmap for the Washington Region’s Future Economy? 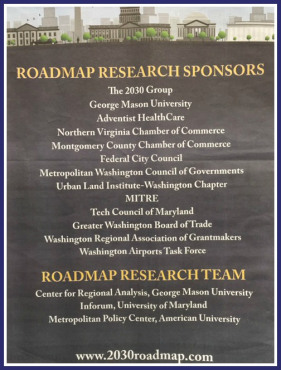 It was just last January that WRAG said “count us in” to Bob Buchanan and Stephen Fuller as the 2030 Group joined with the Center for Regional Analysis to develop a roadmap for the region’s future economy. Today, that roadmap was released.

It identifies seven industrial clusters in which Fuller and his team believe our region has a competitive advantage:

It is on these industries that he recommends we focus our economic development efforts. But before we do that, the regional leaders who Buchanan and Fuller convened over the last year cautioned that we must address three regional deficits: 1) transportation and housing affordability; 2) the lack of a shared regional brand; and 3) insufficient collaboration between the academic and business communities to foster an entrepreneurial culture.

Philanthropy is already making progress on housing affordability. Just last week, WRAG announced a major philanthropy-led initiative, Our Region, Your Investment, to address the housing affordability challenges in our region. And following the presentation by Jennifer Bradley, co-author of The Metropolitan Revolution, at WRAG’s 2015 annual meeting, philanthropists in the region are ready to learn more about what their colleagues did in Northeast Ohio when that region suffered a devastating loss of manufacturing jobs.

Locally, philanthropic leaders have been primed for this conversation for some time. They recognize that they must continue their efforts on workforce development, but it seems that philanthropic leaders are now ready to go deeper into economic development than ever before. Why? Because they know that the stakes are very high when you consider what contributes to the vitality of our region.

Perhaps Stephen Fuller’s presentation at WRAG’s 2012 annual meeting was a turning point. He cautioned his audience of philanthropists that declining federal procurement spending in our region needed to be acknowledged and addressed. Then in 2013, that admonition became very clear as local social profit organizations[i] and their clients struggled with the impact of sequestration and the 16-day shutdown of the federal government. People whose incomes were tied to the federal government were without wages, and as more people live paycheck-to-paycheck, the impact of that revenue loss was immediate. Social profit organizations were doubly affected. The demand for their services was increasing at the same time that they were laying off their own staff because they, too, were reliant on the federal government through federal grants. This was no longer theoretical. This was real.

Now, we have a plan and the work of philanthropists in Northeast Ohio may be a model. To Fuller and Buchanan, I say maybe the third deficit should note “insufficient collaboration between the academic, philanthropic, and business communities to foster an entrepreneurial culture.” The philanthropic community is ready to roll up its sleeves and be an engaged partner in broadly shifting the economic reality of our region. So, once again I say, “Count us in.”

[i] Just a reminder that I try to use the term “social profit organization” instead of “nonprofit” to celebrate the fact that these organizations provide value to society, turning this into a positive term.